In the digital world of today, business owners have come to realize that leveraging app development software can give their company a significant competitive edge over their rivals. The pivotal role of applications for successful business strategies is ensured by the astounding figure of five billion – this is the number of mobile users globally. And if we remember that apps can be accessed from other digital devices as well, it becomes only too clear that any entrepreneur aspiring to build a thriving company has no right to ignore this market.

Statistics show a consistent growth of application downloads, which have almost doubled within the last five years.

The current trend makes developing an application a sine qua non for any business, be it a startup or a corporation with years of history behind them. And if you are firmly set on building one you should decide whether you will do it yourself or hire an outsourcer.

Creating an app yourself may sound daunting, but a modern tech-savvy person can hardly call it unachievable. Here are some tips on how to go about it:

Pros and Cons of Android vs iOS App Development

Before opting for either iOS or Android app development software, you should clearly envisage your future customer. Is it a he or she? How old are they? Where do they hail from? What is their income level?

As statistics reveal, the number of Android users greatly exceeds iOS adherents but the former live mostly in developing countries with a lower-income audience. 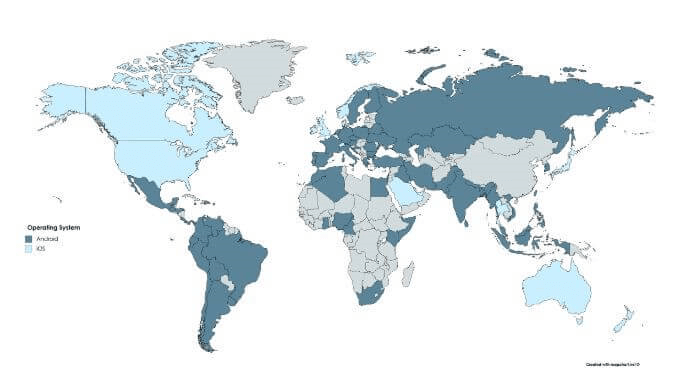 Generally, iOS users are younger people with a better educational background who are likely to spend more on anything, including apps. When you picture your target audience you should compare their image with the portrait described above. The degree of their matching will condition your choice of the operating system for your future app. Some high-profile IT outsourcers like Gravum can build a cross-platform app for you that will work seamlessly on devices utilizing both types of operational systems.

Along with the human factor, there are some technical considerations that can help you make your mind about the operating system your app will be compatible with.

If you are going to attempt creating an app yourself, you should realize that each platform uses different programming languages. Creating Android apps necessitates proficiency in Java and Kotlin while iOS builders should know the basics of Swift of Objective-C. The development tools used in either case differ as well. Android Jetpack, Firebase, and Android SDK are the platforms and kits instrumental for building an Android app. Having opted for IOS compatibility, you will employ iOS SDK, XCode, Swift Playgrounds, and TestFlight.

What are the advantages and disadvantages of each platform?

Android or iOS: A Head-to-Head Juxtaposition

1. The first comparison that comes to mind is accessibility. Unlike iOS with its closed-source code, Android apps have open-source code. It means that IOS apps will work only on Apple devices while Android-based applications have no restriction as to the type of device or its manufacturer. Accessibility of Android apps has one more interpretation: the openness of the code spells a wider choice of features available to developers in comparison with IOS apps, including a wide range of Google design guidelines to be leveraged for creating an intuitive user interface. But, on the other hand, Apple offers iOS app designers a detailed guide for interface design, which considerably saves developers’ time.

2. The second contrasting characteristic is fragmentation, which can be viewed as both a boon and a curse. Android apps can be designed for a wide gamut of devices so in this respect it is definitely a boon. However, the variety of devices presupposes a whole array of screen sizes with diverse resolutions. So the app’s characteristics must be attuned to all of them, which complicates and prolongs the development process as well as app testing, turning fragmentation into a scourge. Instead, the sizes of Apple screens are quite limited, which simplifies app building.

3. The third point to consider is the app release procedure. It is easier with Android-based apps for which Google Play publishing may be completed within a few hours. The App Store is harder to tackle. Your app may be rejected for several reasons, such as poor operability, security restrictions, or inadequate content. Moreover, publishing an app on Apple Store must be preceded by obligatory real-life testing, so several days may elapse before your app becomes available to customers.

4. The fourth property worth mentioning is flexibility, which is greater in the case of Android apps because of the software restrictions imposed by Apple.

5. And finally, money-related issues. More time for development spells more expenses, which is only too true for Android apps. And since Apple users are on the average freer with their money, having an iOS-based app is likely to generate greater income.

App development is a highly demanding and challenging process. It takes a small army of people to launch the perfect app that has all the crucial elements covered. From idea to realization, different processes and stages of app development take place, and each one needs to be perfectly conducted to…

There is a common saying which talks about our future in our hands. However, it would interest you to know that our future lies in the hands of mobile applications. The development of the mobile app is a fast-emerging trend, which can continue for a very long time without fading…